Lindos is this Rock to the sky. Comparison with Acropolis of Athens

Lindos is this Rock to the sky

The 116-meter tall rock -finishing the picturesque landscape of Lindos, this dry and imposing monolith is completely surrounded by the Aegean sea on all sides. As a result, Lindos "rejoices in the sea", as described in a Hellenistic epigram. Despite its striking appearance, Lindos didn't seem important during earlier periods. Although, there have been findings of Neolithic artifacts and Bronze Age objects sporadically spread across the acropolis.

The sanctuary of Athena Lindia is said to have been founded in ancient times, when rich caches were discovered by Mycenaean graves around the city. The Archaic period was a golden age for Lindos, which played an important role in the Greek colonisation movement. Its most famous foundation being Gela located on Sicily Island where it served as military base and port city during ancient times.

The 7th-6th centuries BC saw great development with regards to architecture; this includes temple constructions all over Greece, artistic achievements such as city planning and temple designing like those found here - dedicated mostly towards Poseidon or Apollo.

Kleoboulos was a tyrant who ruled Lindos for many years during the 6th century BC. He was considered one of the "seven sages" of the ancient world. During his rule, the Archaic temple of Athena was built on the site of an earlier structure, and the acropolis received its first monumental form.

The Persian invasion and the merger of the three old cities into the new city of Rhodes (408 BC) led to a decrease in Lindos' importance as a political and economic power (well-known characteristic of Persian ruling, for controlling the colonies). Even though it was not the most important city on the island, Lindos still had a lot of importance. This was because of the famous sanctuary of Athena, which got its final look in the Hellenistic period. The sanctuary was the most important place on Rhodes (and maybe still is!!)

The acropolis was used as a fortress in ancient times, Byzantine times, the period of the Knights of St. John, and Ottoman rule.

Lindos Acropolis, the place to be when in Rhodes.

Today, the ascent to the acropolis is still by the same steep road as in antiquity. After the first outer entrance to the medieval fortress, and before beginning to climb the large stairway that leads up to the Administrative Building of the Knights, we encounter two important monuments on our left: a semicircular Hellenistic exedra, and, next to it, a depiction of the prow of an ancient ship carved in relief in the rock, which formed the base of a statue of Agesandros, son of Mikion, the work of the sculptor Pythokritos in the early 2nd c. BC. The fortification of Lindos by the Knights goes back to the 14th-15th c. AD. As we walk through the ground-floor of the Knights’ Administrative Building, we come out into a large square.

This square is located at the lowest level of the acropolis and it was full of votive offerings in ancient times. There were two rows of vaulted structures on either side of a stairway that led up to a large Hellenistic stoa.

From the Propylaia and temple of Athena, which formed the main sacred precinct, a large staircase leads up to the highest level where they may be found. Five entrances completely isolates the temple from the outside world with a wall. Stoas flank the courtyard in front which probably contains an altar, and these are located in front of and behind the temple respectively. The inner stoa has rooms that face onto this central area.

The Temple of Athena Lindia, which is 22x8 m in size and has a tetrastyle design, was built in the 4th century BC or during the early Hellenistic period on the site of Kleoboulos' temple, which had been destroyed in 392 BC. It is located at the top of the rock and was intended as an ultimate vista for visitors climbing to the Acropolis from the stoa and Propylaia.

From the acropolis, one can see the lower city below, where some of the most important monuments are still visible. These include the theatre, Tetrastoon, and Archokrateion at Kambana—a monumental tomb belonging to some important Lindian family.

Photos of Athens and Lindos Acropolis 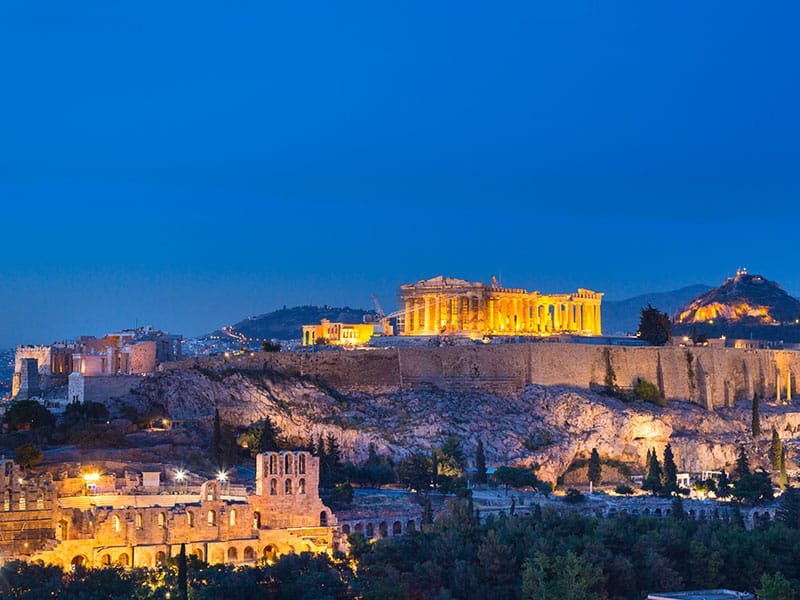 Comparison with the Acropolis of Athens

The Acropolis of Lindos was built on the site of an earlier structure, and the acropolis received its first monumental form in the 6th century BC. The Persian advance and the merger of the three old cities into the new city of Rhodes (408 BC) led to a decrease in Lindos' importance as a political and economic power. Nevertheless, the sanctuary of Athena Lindia continued to be an important religious center .